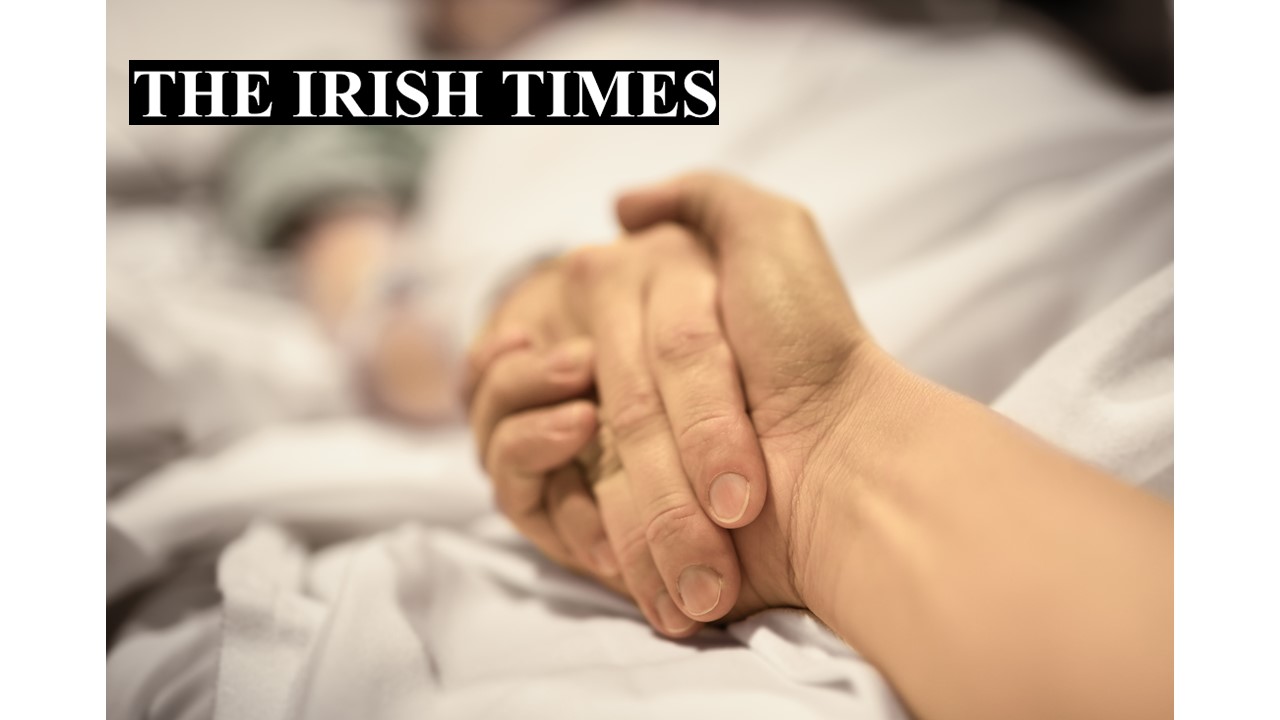 No one should be forced to die alone. Restricting access is cruel

The words of palliative care consultant Maeve O’Reilly brought home to me, yet again, how savage and brutal were the effects of restrictions on people being with loved ones at end of life during the pandemic. They were cruel to the dying – who can’t tell us how it impacted on them – and heart-breaking for those who loved them.

My 90-year-old father, Fionnbar, died in December 2021. He died at home where my five siblings and I were able to talk to him, care for him and accompany him over his last weeks of life. I am sad and grieve him, but I can’t even begin to imagine how I would be feeling now, more than six months later, if he had been in a hospital or a care home and my contact with him was limited, or worse still – as many families experienced over the pandemic – that I was completely unable to visit and be with him.

More than 70,000 people have died in Ireland since March 2020. In an Irish Hospice Foundation survey of 1,200 people bereaved during the pandemic, 56 per cent reported they were not able to spend the time they wanted with their loved one before they died. This separation from loved ones at end of life was among the most savage impacts of the pandemic – and being honest it wasn’t just for the dying and their families. One healthcare worker I spoke to wept as she described holding up an iPad to a dying man, telling him: “It’s your daughter, she is saying she loves you.”

Ireland wasn’t alone in this. Julie Ling, chief executive of the European Association for Palliative Care, confirmed it was an almost universal policy across Europe, during the pandemic, to significantly restrict visitor access to hospitals and care homes. In the US, Helen T D’Couto, physician in pulmonary and critical care medicine at the Massachusetts General Hospital, wrote: “Overly restrictive visitor policies force us to harm patients and families in ways with which we will still be contending for years to come after the pandemic is over.”

Let’s rewind back to 2016. To mark 100 years since the proclamation of Irish independence, Irish Hospice Foundation launched a nationwide consultation process about what people wished for themselves and those close to them at end of life. It was believed to be the biggest ever survey on dying death and bereavement in Ireland, with 3,000 people taking the time to tell us what they thought. Central among their wishes for themselves and their loved ones was to be able to die surrounded by the people they love.

Being honest, no one thought there was anything extraordinary in that finding. That was the norm for us as a society here in Ireland. Hospitals and care settings understood and gave family and friends easy access to loved ones in the last weeks and days of their lives. Pre-pandemic, no one questioned it – but this can no longer be taken for granted.

Today, many hospitals continue to place restrictions on people visiting loved ones. Many of these rules are arbitrary, or paternalistic and they are inconsistent, sometimes depending on who is in charge of a ward. One insider described it to me as a “grace and favour situation”.

This is not good enough. It may have been legitimate, even necessary, to have had limitations on visiting access during the early stages of the pandemic – even for those in the last days of life. After vaccination became widely available this was far more questionable as a practice. Now, when there are no restrictions on tens of thousands of people going unmasked to a stadium or concert or travelling on crowded public transport, it is indefensible that people would not be allowed full and free access to loved ones in the last weeks of their lives.

Prof Cillian Twomey, retired geriatrician, former president of the Irish Medical Organisation and a member of the four-person Nursing Home Expert Panel that reported on the consequences of Covid-19 in residential care settings, is firmly of the view that there should be “an absolute right, if you are dying, to have someone you love with you”. I agree. But “rights” language has its own inherent problems and moves us into a legalistic area. Can we not approach this issue with empathy, common sense and above all with a sense of our common humanity?

We will all die. Each death matters. There is only once chance to get it right. This, like no other, is our moment of shared humanity.

It behoves each and every one of us who has any influence in our hospitals and care homes to ensure that we return immediately to that pre-pandemic norm where people are able to face end of life accompanied by people they love and are not forced to die alone. Surely it is the only fitting acknowledgment of this unique and critical moment of our shared humanity and mortality.

We use cookies on our website to give you the most relevant experience by remembering your preferences and repeat visits. By clicking “Accept All”, you consent to the use of ALL the cookies. However, you may visit "Cookie Settings" to provide a controlled consent.
Cookie SettingsAccept All
Manage consent

This website uses cookies to improve your experience while you navigate through the website. Out of these, the cookies that are categorized as necessary are stored on your browser as they are essential for the working of basic functionalities of the website. We also use third-party cookies that help us analyze and understand how you use this website. These cookies will be stored in your browser only with your consent. You also have the option to opt-out of these cookies. But opting out of some of these cookies may affect your browsing experience.
Necessary Always Enabled
Necessary cookies are absolutely essential for the website to function properly. These cookies ensure basic functionalities and security features of the website, anonymously.
Functional
Functional cookies help to perform certain functionalities like sharing the content of the website on social media platforms, collect feedbacks, and other third-party features.
Performance
Performance cookies are used to understand and analyze the key performance indexes of the website which helps in delivering a better user experience for the visitors.
Analytics
Analytical cookies are used to understand how visitors interact with the website. These cookies help provide information on metrics the number of visitors, bounce rate, traffic source, etc.
Advertisement
Advertisement cookies are used to provide visitors with relevant ads and marketing campaigns. These cookies track visitors across websites and collect information to provide customized ads.
Others
Other uncategorized cookies are those that are being analyzed and have not been classified into a category as yet.
SAVE & ACCEPT
Powered by